The programme of excavations carried out in Winchester under the direction of Professor Martin Biddle from 1961–1971 was undertaken at the instigation of the late Mr. Roger Quirk, C.B.

In the first campaign of 1961 the objectives were limited to a single site and essentially to a single problem: to recover in the face of impending destruction whatever remained in one particular spot of the buildings of the Anglo-Saxon New Minster.

It was impossible to work in Winchester for that long summer of 1961 and not realise the untapped wealth of the city’s archaeology, and the extent to which it was threatened though the demands of modern development.

With this in mind, the Winchester Excavations Committee was formed the following year at the suggestion of Professor Martin Biddle and under the chairmanship of the mayor of 1961–2, Councillor (later Alderman) Mrs. E. C. Neate, J.P.

Our excavations in Winchester lasted a decade and from 1964–1970 we were fortunate to enjoy the collaboration of the University of North Carolina and Duke University. As a result of our collaborative efforts (we were joined by hundreds of volunteers from around the world) we were presented a United Nations Award in recognition of our contribution to international cooperation.

By 1966, approximately halfway through our decade long excavations at Winchester, the results of our work were such that their evaluation and publication could only be secured by the creation of a full-time research team.

The Winchester Research Unit was set up in 1968 and the results of its work continue to be published in the series ‘Winchester Studies’. We have teams based in Winchester and Oxford preparing the remaining volumes. 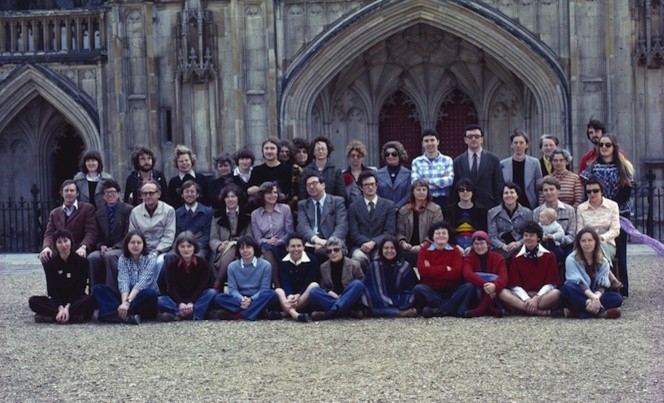 “If ever an archaeologist has had the magic touch,
it is Martin Biddle.”

Intersections: The Archaeology and History of Christianity in England, 400-1200, Festschrift for Martin Biddle and Birthe Kjølbye-Biddle, edited by Nigel Ramsay and Martin Henig. 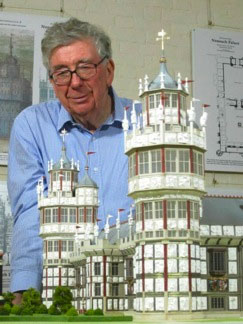 Martin Biddle is an Emeritus Fellow of Hertford College, Oxford, and Honorary Fellow of Pembroke College, Cambridge. He is Archaeological Consultant for St Albans Cathedral, former Chairman of the Fabric Advisory Committee (FAC) for Winchester Cathedral, and former Archaeological Consultant for Canterbury Cathedral. He was the first Lecturer in Medieval Archaeology in England, at the University of Exeter (1963-67), Visiting Fellow, All Souls College, Oxford (1967-68), Founder and Director of the Winchester Research Unit since 1968, Director of the University Museum, and Professor of Anthropology and History of Art, University of Pennsylvania (1977-81), Lecturer of The House, Christ Church, Oxford (1983-86), Astor Senior Research Fellow in Medieval Archaeology, Hertford College, Oxford, 1989, and later Professor of Medieval Archaeology (now Emeritus).

He has lectured on over thirty-five Swan Hellenic Cruises around the Mediterranean and in the Middle East, and India. He and his wife Birthe Kjølbye-Biddle were jointly awarded the Frend medal of the Society of Antiquaries of London in 1986 for their work on Christian Archaeology. Martin was elected a Fellow of the British Academy in 1985 and was appointed OBE in 1997. In May 2010 he was made Honorary Freeman of Winchester.

In June 2014, Martin was awarded a CBE – Commander of the Most Excellent Order of the British Empire – for ‘services to archaeology’.

Martin Biddle’s interest in archaeology began at a very early age. He took part in his first proper dig in 1949, at just 12 years old. This was a Mortimer Wheeler excavation supervised by Molly Cotton at St Albans (Verulamium) where he was allowed to search the wheelbarrows for anything which might have been missed, but was not allowed to enter the trenches.

Following on from this, Martin conducted the excavations of the Manor of the More, an important sixteenth-century palace of Cardinal Wolsey and Henry VIII near Rickmansworth, Hertfordshire, where Catharine of Aragon lived after the annulment of her marriage to Henry VIII. Inhabited from the twelfth century, the house came to Cardinal Wolsey as a possession of the Abbey of St Albans in 1522, and passed to Henry VIII in 1529. The excavations ran from 1952 to 1955 and were carried out on behalf of the Merchant Taylors’ School Archaeological Society. A report of the excavations was published in 1959 in The Archaeological Journal.

National Service with the Royal Tank Regiment brought Martin to Berlin, where in October 1957, whilst serving as a troop leader, the squadron was suddenly disbanded due to army cuts. With four months left to serve, Martin, unsure what to do, wrote asking for advice to Sir Mortimer Wheeler for whom he had dug at Roman St Albans in 1949 and on the great Iron Age fortress enclosure at Stanwick in Yorkshire in 1952. Within days a two-line letter came back: ‘I have spoken to Kathleen Kenyon. You will go and excavate for her at Jericho’. Such was Wheeler’s distinction as a gunner in both wars, as an archaeologist, and as a TV personality, that the War Office gave permission within days.

On 2 November, just two weeks after leaving Berlin, Martin found himself standing beside Katherine Kenyon at 6.30 am looking down fifty-six feet into the great trench in the tell of Jericho, in which she had famously found the Neolithic stone tower of the defences of what was then claimed as the earliest town in the world. He was given a pick-man, two hoe-men and twenty or more basket boys from the nearby Palestinian refugee camps to clear up the trench.

Martin was soon put in charge of a site on the east side of the tell, where a massive mud-brick tower, perhaps a town gate dating to the Middle Bronze Age, some time after 1600 BC, was beginning to emerge.

Martin spent Christmas that year in Jerusalem, with Christmas Eve in the Church of Nativity in Bethlehem.

In 1958 Martin returned from Jericho. During the eight months which followed before going up to Pembroke College, Cambridge, he found work directing excavations for the Ancient Monuments Inspectorate on sites threatened by development: the deserted medieval village of Seacourt on the Oxford Western By-Pass, now the A34; a motte-and-bailey castle of King Stephen’s time at Therfield near Royston in Hertfordshire; and a Roman villa at Twyford outside Winchester in the grounds of a house which belonged to the splendidly crusty admiral who had taken the surrender of the Italian fleet in 1943.

In the same summer of 1958 Martin looked for the first time for the site of King Henry VIII’s vanished palace of Nonsuch in a park near Ewell. Henry had begun Nonsuch in 1538, on the thirtieth anniversary of his accession, to celebrate the birth of Prince Edward, the longed-for heir to the Tudor throne. Martin had learnt of Nonsuch three summers before in 1955 whilst working in the library at Merchant Taylors’ School, and had decided there and then to find and excavate the palace.

In the Long Vacation of 1959, this came about. In twelve weeks the greater part of the palace was uncovered by a team of about a hundred volunteers, mainly from local schools in Sutton, Cheam, Ewell and Epsom, supervised by Cambridge undergraduates, many of whom went on to become leading figures in British archaeology. The plan of the palace was revealed and thousands of fragments of its decoration in plaster stucco and carved and gilded slate were recovered. This was the first time that archaeology had ever been used to address problems in the architecture and art-history of the early modern period. It caught the public imagination with radio and Cliff Mitchelmore’s nightly programme on TV, and received 75,000 visitors organized in guided tours, doubling the funds provided by the Ministry of Works.

In 1965, Martin won the British Archaeological Association’s Reginald Taylor Prize for an essay on the principal artist who worked at Nonsuch entitled ‘Nicholas Bellin of Modena, An Italian Artificer at the Courts of Francis I and Henry VIII’, which was published in the Association’s Journal. He showed how much could be learnt from fragmentary remains, and with an unerring eye was able to find elements of relief decoration that were otherwise known only from distant views in drawings and engravings. He brought the palace back to life, and his lectures on the subject have held audiences spellbound for over fifty years.

By the time he undertook the first of the Winchester excavations in 1961, Martin’s experience was therefore already extremely broad. He was also familiar with the difficulties and the potential of excavating multi-period sites. The excavations in Winchester lasted from 1961 to 1971 and saw the formation of the Winchester Excavations Committee and the Winchester Research Unit, which Martin founded and of which he has been director since 1968. The excavations set out to study the city itself through two thousand years from the Iron Age, through Venta Belgarum, the fifth largest city of Roman Britain, the planning of the city by Alfred the Great in the late ninth century, the Norman city with a new cathedral and castles, the decline of the later Middle Ages, to the emergence of modern Winchester in the eighteenth and nineteenth centuries. Never before had such a programme been undertaken and carried through in any city in Europe.

Family and Other Major Projects

Winchester is also where Martin met Birthe Kjølbye. She came to Winchester in 1964 to take part in the excavations, and due to her skill in the techniques and management of excavation, was soon given charge of the site of Old Minster, the Anglo-Saxon cathedral. Birthe and Martin were married in 1966, and had two daughters, Signe and Solvej.

Martin and Birthe formed an extraordinary archaeological team. They revolutionised the discipline of archaeological excavation, introducing new recording techniques, and training a whole generation of archaeologists. Martin ‘introduced into urban archaeology a multi-period and multi-disciplinary approach employing archaeology, topography and historical archives, treating all periods from the Iron Age to the post-medieval with equal weight’ (John Collis, Great Excavations).

Other major sites which claimed their interest include excavations at St. Albans Abbey. They excavated the Chapter House in 1978, in 1982-4 they discovered Roman burials under the cloister, proving the existence of a cemetery on the site where St. Alban was traditionally executed and buried around 300, and in 1991-3 they excavated and directed the reconstruction of the site of the medieval shrine of St. Alban in the east end of the cathedral. They also worked at Repton, where the remains of the Viking Great Army that had overwintered there in 873-4 were unearthed, at the Tomb of Christ in the Church of the Holy Sepulchre in Jerusalem, and Qasr Ibrim in Egypt.

Birthe died in January of 2010 after a two-year battle against ovarian cancer. She continued to work on the ‘Minsters’ volume of the Winchester Studies series up until a month before her death.

Martin is now based at the Winchester Research Unit office in Oxford. He is General Editor of the Winchester Studies series and is currently working on a number of projects. 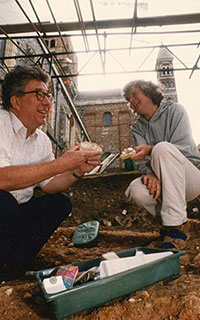 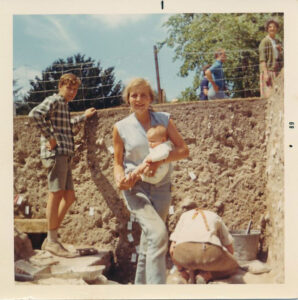