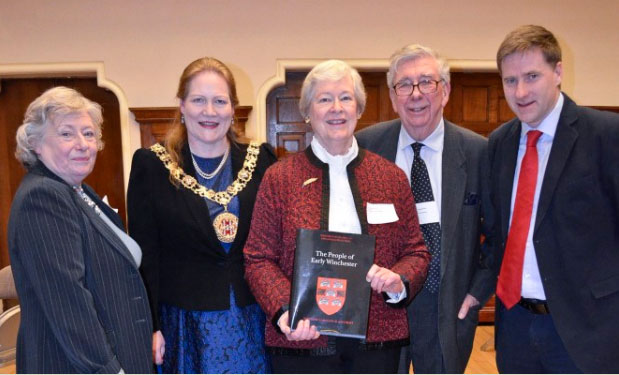 The latest Winchester Studies volume, 'The people of Early Winchester' was officially launched in the King Charles Suite at the Winchester Guildhall on Wednesday 15th February.  The book which traces the  lives, health, and diseases of Winchester's inhabitants as seen in the skeletal remains from the mid-third century to the mid-sixteenth century, is a remarkable achievement.

"Here is a work of exceptional importance...this magisterial volume is by far the most comprehensive published study of burial evidence for any part of Britain"
Martin Henig, Wolfson College, University of Oxford

The book represents many years of hard work and research by author Dr Caroline Stuckert, who travelled to Winchester from Philadelphia to attend the launch.  This book is unique in that it provides a continuous chronological window of Winchester's population over 1300 years rather than being a series of isolated studies.

The event was attended by a number of distinguished guests including Steve Brine, MP; Cllr Jane Rutter, Mayor of  Winchester, and Cllr Keith Chapman, Chairman of Hampshire County Council.

This is the eighth book to be published in the Winchester Studies series and is printed by Oxford University Press.