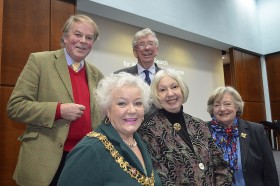 This year’s Annual Lecture evening organised by the Winchester Excavations Committee set out to explore the lost Minsters of Winchester.

Professor Martin Biddle, CBE, FBA, Director of the Winchester Research Unit, described to a packed house, how as late as 1962 nobody knew where either of the two great churches of Anglo-Saxon Winchester, Old Minster and New Minster, had once stood. He told the fascinating tale of how these two churches were both found during his excavations in Winchester in the 1960’s and early 1970’s. And how Old Minster was completely excavated, revealing a vast building of huge complexity with a five-storey tower and the grave of St Swithun.

Dr John Crook, FSA, Consultant Archaeologist at Winchester Cathedral, explored the lost West Front of the Norman Cathedral, which was remodelled in the fourteenth century, when the nave of Winchester Cathedral extended 40ft further west than it does today, terminating in a western massif. Whilst the form of this massif is debated, Dr John Crook was able to reconstruct the lost West Front for the audience, using the evidence presented from parts of the structure that survive above ground in a boundary wall and high within the present west front, and the plan of the Norman structure known from archaeological works (including the Cathedral Green excavations of the 1960s).

King Alfred and Winchester are forever linked. New Minster was founded in 901 by King Alfred’s son and successor King Edward the Elder. Built in part to serve as a burial place for his parents and subsequently for himself and other members of his family, it stood alongside the Cathedral Church of Old Minster, until the community transferred to the northern Winchester suburb of Hyde c. 1110. Professor Barbara Yorke, FRHistS, Emeritus Professor of Early Medieval History at the University of Winchester, examined the circumstances surrounding the use of New Minster as a place of royal burial, the significance of the burials in the subsequent history of the foundation, and their sad fate after Hyde Abbey was dissolved in the sixteenth century.

The evening, which was attended by the Mayor of Winchester, Cllr Eileen Berry, was introduced by the Chairman of the Winchester Excavations Committee, Barbara Bryant and closed by Nigel McNair Scott (both pictured right). The audience were enthralled by the three eminent speakers, who provided a thoroughly enjoyable and informative evening at Winchester Guildhall.